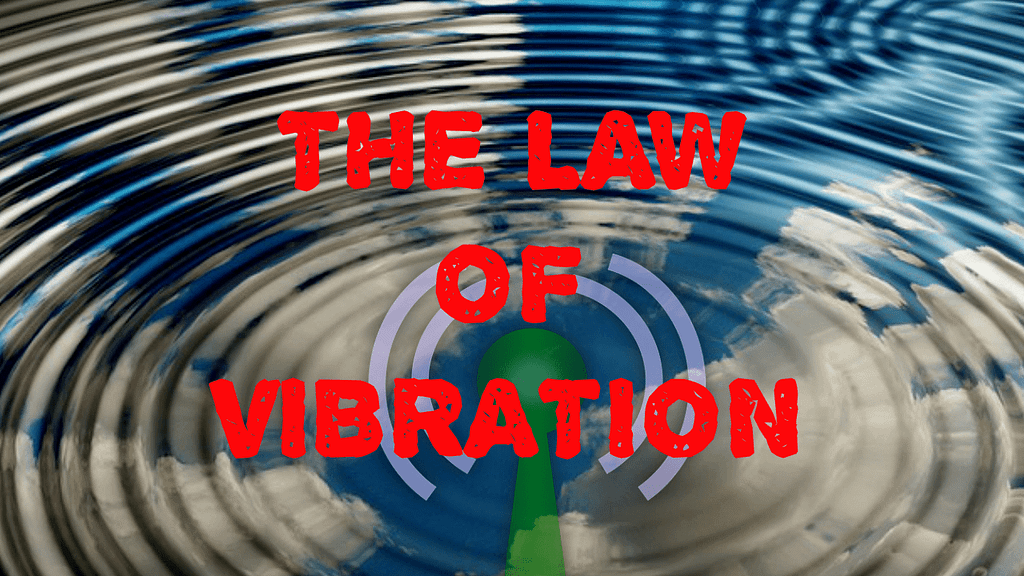 This week is all about mind, medicine, health, well being and The Law of Vibration. Down the page you’ll find a discussion of the placebo effect and how you can prove to yourself that your attitude of mind and the Law of Vibration have already demonstrated their power over any distressing medical condition to which you may be subject. So read on my friend.

A good friend of mine often suffered from severe back pain that had no apparent physical cause; no intervertebral disc issues or the like. His malady was intermittent and he thought it’s onset usually correlated well with stress and worry brought on by his job.

That such was the case I have no doubt. So when Haanel says “The various forms of inflammation, paralysis, nervousness and diseased conditions generally, are the manifestation of fear, worry, care, anxiety, jealousy, hatred and similar thought.“,  I am not surprised. In earlier lessons it was suggested that if your thoughts dwell on sickness and disease, every cell in your body will respond in like manner and manifest those conditions.

The Law of Vibration

In Part Twenty-Two (5) Haanel provides an explanation of this effect when he says “It is through the law of vibration that the mind exercises this control over the body. We know that every mental action is a vibration, and we know that all form is simply a mode of motion, a rate of vibration. Therefore, any given vibration immediately modifies every atom in the body, every life cell is affected and an entire chemical change is made in every group of life cells.”

Thoughts are given vitality and power by the kind and quality of emotions with which they are infused. The emotions of fear, worry and anxiety vibrate at specific levels and affect cells and systems in your body in ways that Haanel suggests prevents them from eliminating waste products. This in turn contributes to malfunction, disease and eventual cell death. The latter I know to be true and Haanel’s insight of more than 100 years ago is remarkable.

Haanel goes on to assert in Part Twenty-Two (13) that “The way to health is founded on the law of vibration, which is the basis of all science, and this law is brought into operation by the mind, the “world within.” It is a matter of individual effort and practice.” In other words, disease and other conditions can be treated by changing your thoughts from fear and anxiety to thoughts of health and well being, thereby raising the level of vibration to which the cells are subjected. In this way the lower vibratory levels of fear and anxiety can be neutralized and their efects reversed.

He goes so far as to say that “There can be no doubt that few patients are aware how much they can do for themselves. What the patient can do for himself, the forces he can set in motion are as yet unknown. We are inclined to believe that they are far greater than most imagine, and will undoubtedly be used more and more. Mental therapeutics may be directed by the patient himself to calming the mind in excitement, by arousing feelings of joy, hope, faith, and love; by suggesting motives for exertion, by regular mental work, by diverting the thoughts from the malady.”

Ever Experienced The Placebo Effect?

This is clearly related to the power of autosuggestion and is the basis of all placebo effects. If you are like me, I think you will be able to prove this to yourself quite easily. Just think back to the last time you were ill enough or in enough pain to have to visit you physician to get some relief. Even better, think back to a time when you were a kid in that situation.

When you got to the clinic and were sitting there waiting for the Doc, who is ALWAYS late, what did you feel like? What were your thoughts?

My thoughts invariably were “hey I feel way better. Maybe I’m wasting my time here. Maybe I should just head home because I’ll be just fine.” This happened about a year ago when I had an abcessed tooth. I was in excruciating pain so I got an emergency appointment with my dentist. By the time I got there I felt much better and almost pain free. I knew from experience that wasn’t going to last so I stayed for the root canal procedure and got some antibiotic and pain killers.

The basis of this effect is completely psychological and based on the faith I have, as do most people, that my medical professionals will invariably deal successfully with whatever issue I have. As Haanel suggests this mental attitude has a profound effect upon the body and explains my reaction.

In the longer term, one’s attitude toward sickness and its opposite, health, can have a profound effect upon well being (or lack thereof). My attitude, based on long experience is that I do not get sick, I rarely “catch” any of the influenza’s and colds that circulate in our community. If I do happen to be affected, the effects are generally mild and short term compared to other people.

I don’t know if this is indicative of mental prophylaxis and mental therapeutics, but I’ll keep right on with that attitude because it has served me well for a very long time.

Og Mandino likewise references the incredible power of thoughts mixed with emotions in The Scroll Marked VI (The Greatest Salesman In The World, Chapter Thirteen). At first when he writes “Weak is he who permits his thoughts to control his actions; Strong is he who forces his actions to control his thoughts.”, I think, “wait a minute! We’ve been working hard for nearly 6 months to control our thoughts so that our actions will get us to where we want to go!”

But then I realize the idea is that nature plays tricks on us by virtue of the fact our emotions shift from positive to negative, depending on the day to be experienced. He urges us to bring joy and enthusiasm and brightness and laughter into each day, regardless of which moods or emotions you happened to wake up with. If you feel despondent, think thoughts of peace and joy and reinforce those thoughts with actions such as singing and dancing.

This raises the level of emotional vibration because as Haanel so aptly says “Every cell in your body is intelligent and will respond to your direction. The cells are all creators and will create the exact pattern which you give them.” (Part Twenty-Two [15]) and, “We know that a higher rate of vibration governs, modifies, controls, changes, or destroys a lower rate of vibration” (20).

This is also what Haanel refers to in The Master Key Part Four as he provides the instructions for the application. He says “mentally let go of all adverse conditions, such as hatred, anger, worry, jealousy, envy, sorrow, trouble or disappointment of any kind”(30), and also “The reason that some cannot do this is because they allow themselves to be controlled by the emotions instead of by their intellect. But those who will be guided by the intellect will gain the victory.“(32).

This is to my mind the epitome of “Act As If“. It applies to your entire existence;health, wealth, whatever it is you experience. The Law of Vibration applies not just to your physical health; mental health and your ability to attain whatever your goals in life toward which you strive are affected as well. Control your mind and thereby control your life experiences and those of people around you. It’s as simple and complicated as that.

Excellence Is Its Own Reward

Who Had The Greatest Positive Impact On Your Life

I Don’t Get Paid For Doing That

Your Reputation Lives Long After Your Passing

Life Lessons Learned And Not Forgotten MKMMA Commencement Week 24A-3

Commencement The Start Of A New Journey MKMMA Week 24-3

Law of Compensation And The Golden Rule MKMMA Week 23-3