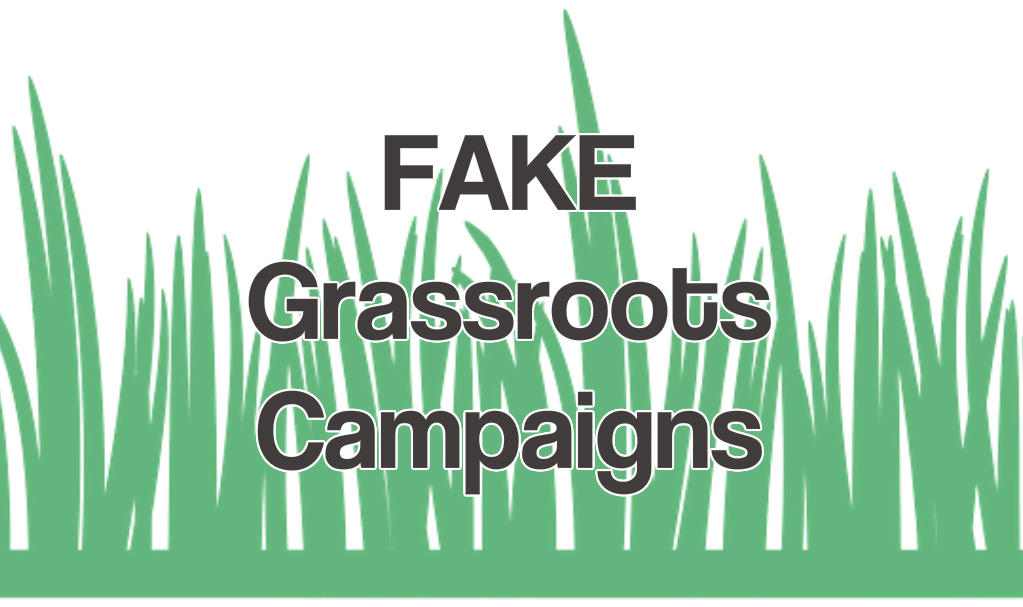 In today’s political atmosphere fake news has become a byword and a reality. It gives even more sinister overtones to political spin, trending more to downright lies than emphasizing the favourable aspects of a thing and ignoring completely the destructive. Fake grassroots campaigns have always gone the extra mile toward dishonesty and deception.

Such “Astroturf” campaigns are designed not just to deny evidence and discredit opponents but also to imply broad public support for products or practices.

I take the liberty of reproducing here an article published by The David Suzuki Foundation. It deals with current issues whereby concerted efforts are underway to distort the facts and plant the seeds of doubt about issues like Climate Change and endangered species.  Included are some great background examples of how the technique of fake grassroots campaigns has been used in the past regarding Smoking and Cancer and Climate Change. The original article and links to related articles is here: https://davidsuzuki.org/story/fake-grassroots-campaigns-deserve-uprooting/

Read the article and explore the supporting links. Here you go.

By David Suzuki with contributions from Senior Editor Ian Hanington

AstroTurf looks and feels like grass — in an all-too-perfect way. But it’s not grass.

Now the well-known artificial turf’s brand name has taken on a new meaning, referring to purported “grassroots” efforts that are actually funded and supported by industry and political entities.

Some people, organizations and campaigns around everything from forestry to fossil fuels look and feel “grassroots,” but many are anything but. In discussions around climate change and fossil fuels, for example, we see groups like Canada Action (and its spin-offs, Oil Sands Action and Pipeline Action), Ethical Oil, Resource Works, the International Climate Science Coalition, Friends of Science and the Canadian Taxpayers Federation, among others.

It’s one tactic in the industry playbook. In a recent column, we discussed science denial campaigns related to climate change and caribou habitat protection. Astroturf campaigns are designed not just to deny evidence and discredit opponents but also to imply broad public support for products or practices.

Many of the organizations are secretive about their funding and alliances, even as they attack social justice and environmental organizations over “foreign funding” and collaboration with international groups.

In B.C., they go back at least as far as the 1980s and ’90s, during the “War in the Woods” over logging in Clayoquot Sound. To counter massive protests, the Citizens Coalition for Sustainable Development, also known as Share B.C., was launched with support from and ties to the forestry industry, later spawning a number of “Share” offshoots.

The tactic gained notoriety in the U.S. after the Environmental Protection Agency released a 1992 report about the health impacts of tobacco smoke on non-smokers. In response, the world’s biggest tobacco company, Philip Morris, launched a campaign “to prevent states and cities, as well as businesses, from passive-smoking bans.”

The company hired PR firm APCO, which warned that industry spokespeople are not always seen as credible messengers and that a “national grassroots coalition” would carry more weight. APCO then established the Advancement of Sound Science Coalition to challenge the scientific consensus about tobacco smoke harms.

Doubt is our product since it is the best means of competing with the ‘body of fact’ that exists in the mind of the general public. It is also the means of establishing a controversy

In his book Heat, U.K writer George Monbiot quotes a memo from tobacco company Brown and Williamson: “Doubt is our product since it is the best means of competing with the ‘body of fact’ that exists in the mind of the general public. It is also the means of establishing a controversy.”

The coalition, with additional funding from Exxon and other fossil fuel companies, went on to sow doubt about climate science. Its name illustrates another tactic: using labels and branding to convince the public they’re evidence-based or to blur distinctions between them and legitimate entities. In Canada, the International Climate Science Coalition and Friends of Science (both of which Tom Harris has been or is involved with), are anything but friendly to science.

In 1998, a group called the Oregon Institute of Science and Medicine sponsored the Oregon Petition, which urged the U.S. government to reject climate change measures. It used the same font and format as the legitimate Proceedings of the National Academy of Sciences, prompting that organization to issue a statement distancing itself from the bogus group.

As the internet and social media become greater forces in society, astroturf groups and campaigns are growing, especially around global warming. Armies of trolls and credible-sounding organizations spread similar messaging on a range of topics. In keeping the forestry industry’s caribou science denial tactics, we can expect to see it using PR firms and ostensibly third party voices to make its case.

Although it would be difficult or impossible to end astroturfing, people can learn how to spot phoney “grassroots” organizations and campaigns.

SourceWatch and DeSmogBlog provide thoroughly researched information on a range of groups and individuals involved in these campaigns.

For the sake of public discourse and progress on important social, health and environmental issues, it’s up to all of us to critically assess all information sources.